The Italian National Champions exploit the last chance to jump on top of the standings in Valle d’Aosta. Kerschbaumer dominates the race ahead of Sarrou and Bertolini, for Lechner a third place is enough behind Richards and Ferrand-Prevot

The 2019 edition of Internazionali d’Italia Series was among the most beautiful and contested in recent years. It’s shown by the quality of the riders, by the intensity of the duels we have seen through three months of competitions. Everything got down to the final test of Saturday June 22nd, La Thuile MTB, raced on a sunny day after the night’s showers: an event on its debut, but already indicated as a possible new entry for the World Cup in the upcoming years. Credit to a beautiful, demanding and technical course, masterfully realized by Enrico Martello, and to the welcoming of the Aosta Valley’s town, very much used to the big events’ atmosphere.

Before the closing act, the fate of at least three categories was still uncertain: home-favorite Andreas Emanuele Vittone (V.C. Monte Tamaro) looked to have an edge among Junior Men, but between Open Men’s Stephane Tempier (Bianchi Countervail) and Gerhard Kerschbaumer (Torpado-Ursus), Open Women’s Martina Berta (Torpado-Ursus) and Eva Lechner (Torpado-Südtirol) and Junior Women’s Letizia Motalli (KTM-Protek-Dama) and Letizia Marzani (Merida Italia Team) it had been a matter of few points for the whole five stages, and only the spectacular showdown in La Thuile could finally declare the new kings and queens of Internazionali d’Italia Series. With some twists of fate still in store.

La Thuile is Kerschbaumer’s apotheosis: World’s #1 takes it all

From the 2018 Internazionali d’Italia Series, something has changed in Gerhard Kerschbaumer (Torpado-Ursus). The wins in Pineto and Chies d’Alpago had elevated him to a different dimension and a new awareness, the same that led him to the World Cup success in Andorra and the World’s silver medal after a tight battle with Schurter.

Today at La Thuile MTB, the World’s #1 offered a classy display, winning with authority a spectacular and top-level race, in which the technical quality of the course met the riders’ desire to give their very best, and climbed back to the top of Internazionali d’Italia Series seven years later.

Second overall before the race, Kerschbaumer knew he had to attack to assault the lead of Stephane Tempier (Bianchi-Countervail) and was ready when Gioele Bertolini (Santa Cruz-FSA) accelerated early on, followed by the fellow Italian, Jordan Sarrou (Absolut Absalon) and Maxime Marotte (Cannondale). Starting from lap 1 after the launch, Kerschbaumer took the initiative by forcing a frantic pace: first to give up was Marotte, followed by Bertolini in the third lap, and finally Sarrou in the penultimate one, leaving way to a solo parade for the Italian Champion. In the meantime, Tempier was forced out of the race in lap 3, due to a broken chain. The Frenchman was left with the second place overall, followed by teammate Nadir Colledani, ninth on the day.

“It was a tough and beautiful race, very high level – told Kerschbaumer, – I liked the loop since the first recognition, but honestly I didn’t expect Sarrou, and particularly Bertolini, to be so strong today. I am back on the Internazionali d’Italia Series throne after 2012, but it’s an all-different story: it was three months of highly-competitive racing, closed by this World-class La Thuile MTB.”

“What has changed from last year? I am more serene, more confident. I know I can go fast, to make a difference on the uphill. The results are only a consequence.” There was more than a reason to celebrate at Torpado-Ursus, with Juri Zanotti claiming the overall win among Under 23.

Huge turnover among Women: overall success for Lechner and Marzani

As it was the case among Open Men, also the Women’s leaders could not defend their jerseys from the final attack of their rivals.

The Open Women race was dominated by Evie Richards (Great Britain), who left Chiara Teocchi (Bianchi Countervail) and Pauline Ferrand-Prevot – who led until halfway – pace the race early on, and then came back to take over the lead in the third lap and go on from there to the top step of this first edition. “I was panicking a bit at the beginning, as I was losing positions while I am used to be a fast starter, but I recomposed and started moving up from the back, and maybe this was the key for the win. I am so happy and pleased to have written my name on this first edition.”

The French National Champion closed second, 1.16 behind the Brit, giving signs of an improving condition: “Today I moved in the lead a bit too early, and I was left with little gas in the finale. But I feel I am on the right track.”

Ending third at 1.57, Eva Lechner was able to see off Martina Berta (7th) and win the Internazionali d’Italia Series GC for the first time in her career. “After many years, I had the opportunity to race in Italy more, and aim for this important title. It was a long and hard battle, but I am really happy.” For Valle d’Aosta-born Martina Berta, the disappointment is mitigated by the success in the Under 23 Women’s category.

Among Junior Women, in the UCI Junior Series race, it was a race in the race: Austrian Mona Mitterwallner (Austria) did one on her own, moving clear by a huge margin, but behind her Letizia Marzani managed a great comeback to second place ahead of Cornelia Holland (Austria), stripping the crown from Letizia Motalli (eight) by only one point 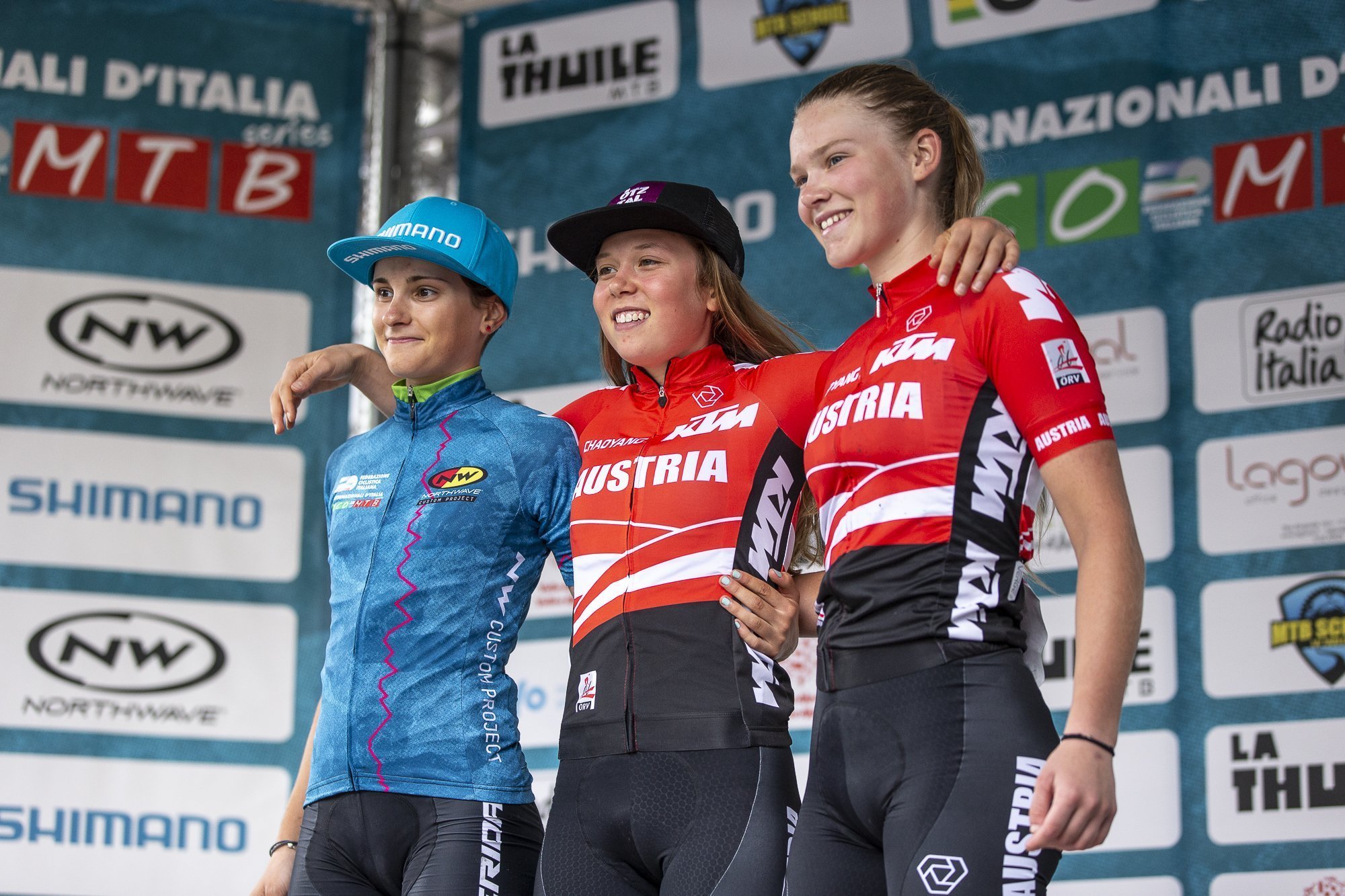 The best of the Junior Men’s category lined up in sunny La Thuile for the UCI Junior Series race opening the programme on June 22nd.

Many were expecting World’s #1 Charlie Aldridge, local fans were hoping for home-guy Andreas Emanuele Vittone – wearing the circuit leader’s jersey – but the tough and spectacular course charted by Enrico Martello, made even trickier by the night showers, demanded for strong legs, mind and handle in order to face the steep downhills of La Thuile MTB.

After taking the lead early on, Andrea Colombo (V.C. Monte Tamaro) came in second place, ahead of Jonis Baumann (V.C. Monte Tamaro), whilst their teammate Vittone had to settle for 7th, but could be happy with the Internazionali d’Italia Series overall win ahead of Emanuele Huez (KTM-Protek-Dama) and Colombo himself. Scot Charlie Aldridge was fifth on the day. 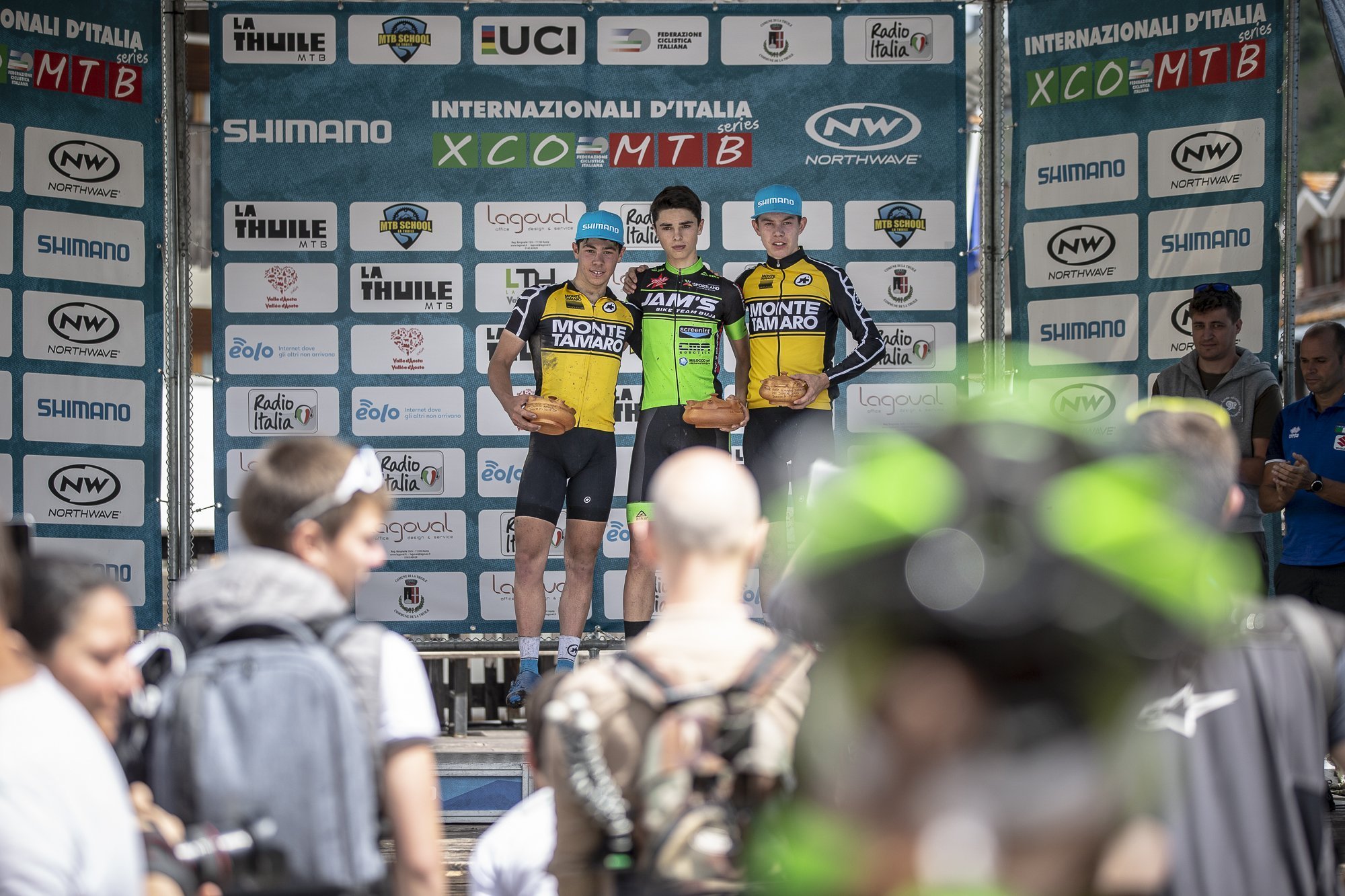 Michele Mondini and Luca Carton of CM Outdoor Events, the managing company of Internazionali d’Italia Series, are satisfied with the 2019 edition of the most important Italian Cross Country circuit.

“The season didn’t have an easy start, but our effort were paid back by high-level events and rising appreciation from riders and fans. The progression of Italian mountain biking on the international level shows that our commitment pays off: it’s not only a better show, but it also benefits the system. Ahead of the Olympic season, we are determined to remain on this track, hoping to find old and new partners who believe in this sport and share our vision.”

“None of this would have been possible to achieve without Shimano and Northwave, whose commitment over the years was impressive in terms of closeness and passion, and are much more than sponsors to us. Our fondest ‘thank you’ goes to them, to the Italian Cycling Federation, the races’ organizers, and the team of people who worked with immense dedication in the five stages of this year’s circuit.